Monday the 24th of September saw the judging of Mountmellick for the National Enterprise Town Competition. Running since 2016 the competition aims to promote enterprise by bringing businesses and community groups together to showcase the spirit of enterprise in their local area. The awards offer a prize fund of €157,000 spread out over a number of categories including national, regional and small town prizes. Mountmellick worked tirelessly in the run up to the day of judging to showcasing the hard work of the tidy town team which earned them an Endeavour Award in this year’s Tidy Towns Competition. Businesses, community groups, entrepreneurs, Councillors and members of Laois County Council converged in the Forum Hostel to await the arrival of judges, Tom Dowling, Eddie Breen and Maeve Lalor.

Tom worked in Local Government for over 40 years before retiring as Chief Executive of Meath County Council in 2012 and previously worked in the same position with Carlow County Council. Tom’s passion has always been about community endeavours, local involvement in economic development and partnerships in achieving outcomes. He is the Chairperson of the judging panel for the National Enterprise Towns Award and the Chairperson and Founder of Pride of Place.

Eddie worked for over 40 years in local government retiring as Chief Executive of Wexford County Council in 2012. He was previously employed in the same position in Waterford City. Eddie was Chairperson of many organisations throughout his career including The City and County Managers Association. He also served on numerous high level Government Boards including the National Roads Authority. He had a very strong relationship with business communities of Wexford and Waterford and a strong interest in the community’s role in enterprise.

Maeve Lalor has worked with Bank of Ireland for over twenty years. During this time she has held many roles in both Dublin and Meath. She is now Community Banking Leader for North Meath which involves working with enterprise, personal customers and community groups in this area. Maeve is the community representative on the Board of Management of her local school for some time. She is also involved with the O’Leathlobhair Clan and was elected the Clan Chieftain in 2016 holding this position for a year. 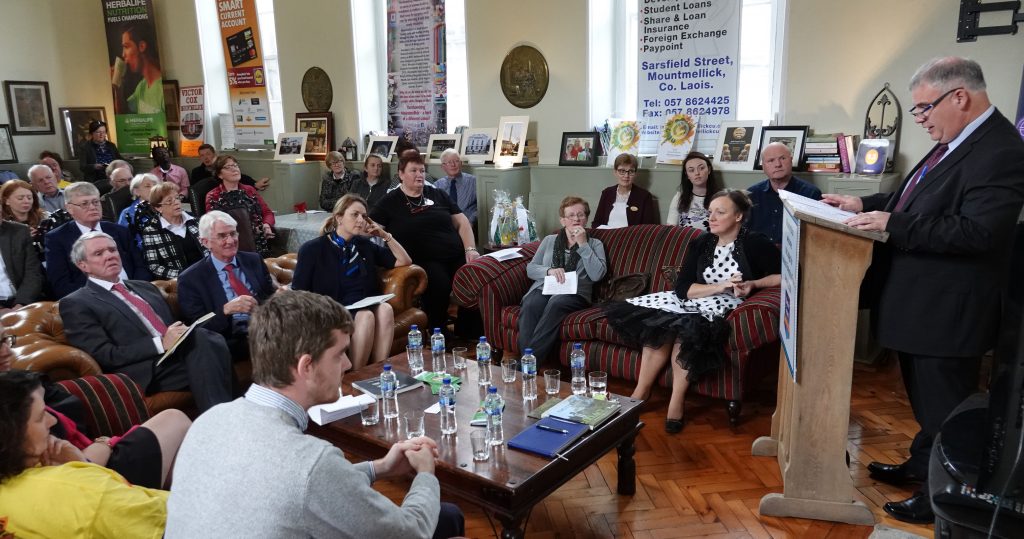 The judges were officially welcomed to the Forum by Maria Harris (Bank of Ireland) and Denise Rainey (Laois County Council) where proceedings began with a short presentation from Eugene Conroy (owner of the Forum). Eugene briefly outlined the restoration of this beautiful old Presbyterian Church and its new function as a way point of multicultural guests from across the world. Paddy Buggy the Manager of the Mountmellick Development Association (MDA) then took over beginning the presentation in earnest. Paddy touched on a number of aspects of the town focusing first on Mountmellick’s central location and close proximity to Dublin via the motorway network. He acknowledged the strong “blended family” community that has developed in Mountmellick and the strong influences of the Quakers & the history of the industry in the Town. While industry did decline in Mountmellick during the 1980s, Paddy highlighted the resurgence and development of enterprise over the last 30 years specifically mentioning the establishment of the MDA in the 1980s, the development of the Business Park and the addition of commercial kitchens, an incubation hub in the square and plans for the development of a digital hub opening in 2019. The strength of Mountmellick’s ability to move and develop with the times has been due to a strong sense of identity and leadership from the businesses and community groups and their efforts in reaching out and using their network of partners (Laois County Council, The Business Support Unit, Laois LEO, Laois Partnership, Tusla, DSP HSE, IDA and Enterprise Ireland). 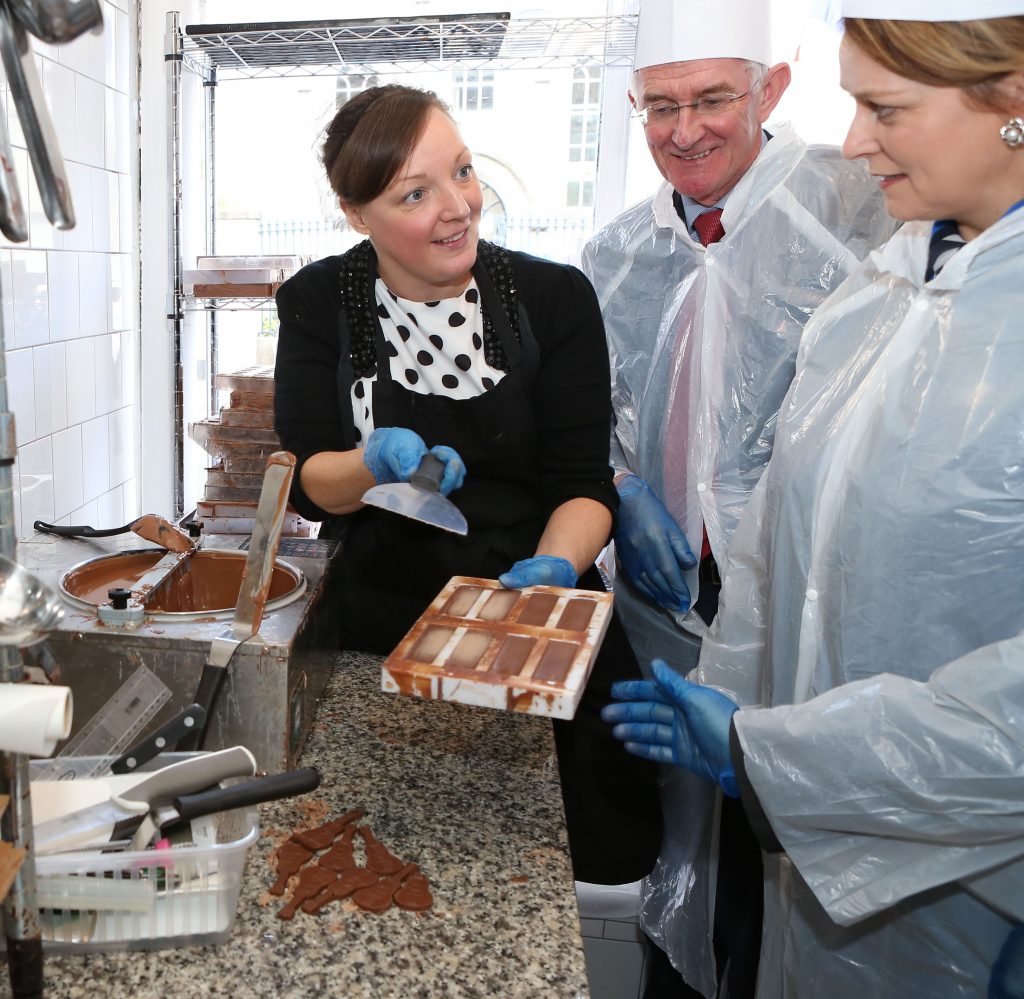 Catherine O’Callaghan , the owner of Cocoa Couture, spoke about not only starting a new business but joining a new community when she moved to Mountmellick. Catherine gave an impassioned speech taking the judges through her journey in setting up a business and detailing the support she received from the Local Enterprise Office in Laois and how instrumental they were in helping her to settle on the idea of opening an artisan chocolate shop. Catherine was followed by Hazel Duffy a third generation florist who together with her mother Yvonne won the Wedding Journals Irish Wedding Florist of the Year Award 2018. Hazel highlighted the many awards which Mountmellick has won over the past few years including Michael Onalimi’s success in the African Professional Network of Ireland’s Lion’s Den competition. Hazel also spoke about the online support of the town that contributed to Yvonne’s florist beating off stiff competition from Adare Manor to claim the National Florist Award and the community’s role in aiding the Yarn Bombers to secure the People’s Choice Epic Award in both Ireland and the UK. Talk then turned to foreign investment with Kevin Egan of Standex taking the stage. Standex opened in Laois in 1978 and this year celebrated 40 years in Mountmellick. Kevin spoke about Standex’s success in the town and how it relates to the strength of the community support it receives, the close assess to national and international infrastructure and the ability of the people of Mountmellick to innovate and continue to develop a new and exciting enterprise environment. 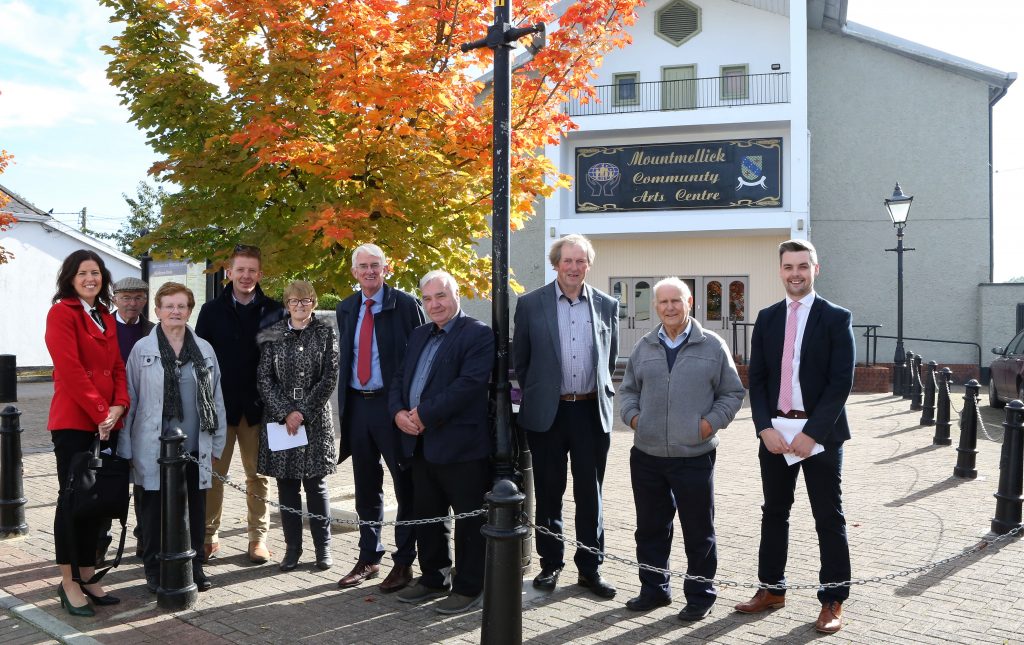 With the presentation complete the judges then engaged in a Q&A session with the audience. The judges spoke with a wide variety of community groups including; the Yarn Bombers, Tidy Towns and Para-Athlete Ailish Dunne. With the Q&A wrapped up the judges moved across the road to Cocoa Couture before being split up on three routes selected to showcase Mountmellick. Route one brought judge Maeve Lalor to the Bay Road Business Park to meet some of the businesses operating out of the Park. Along the route she also took in the Railway House, Wolfetone Court and the Civic Offices. Route two took judge Tom Dowling to O’Connell House Studios to meet some of the towns new business start ups. Along the route he learned about the significance of the towns Georgian Square and surrounding streets before arriving at the Community Arts Centre to hear their plans for the future. Route three took judge Eddie Breen along the Mountmellick riverwalk where he learned about Mountmellick’s new flood relief measures. His tour also consisted of a tour of the MDA Business Park, Standex, the Embroidery Museum and the MDA’s facilities including the commercial kitchens and digital hub. With the three routes complete the judging day concluded at the Hares Corner with a presentation of gifts to the judges by Mountmellick Community School and entertainment provided by the local Men’s Shed. In closing Tom Dowling commended the coordinating committee, businesses and community groups on their efforts to organise the event stating;

“Mountmellick was a town with a great story to tell and with the ambition and character to become a great enterprising town.”

The Awards night for The National Enterprise Town Awards is scheduled for the 28th of November in The Lyrath Hotel in Kilkenny.

To find out more about the MDA’s commercial kitchen specifications or booking the facilities please contact the MDA Manager Paddy Buggy on info@mountmellickdevelopment.com or 057 86  24525